Here is a therapist who created the fasten-ator.  Her website is www.school-ot.com.  Her name is Jennifer Dodge.  Here is what she says on her site about her product. 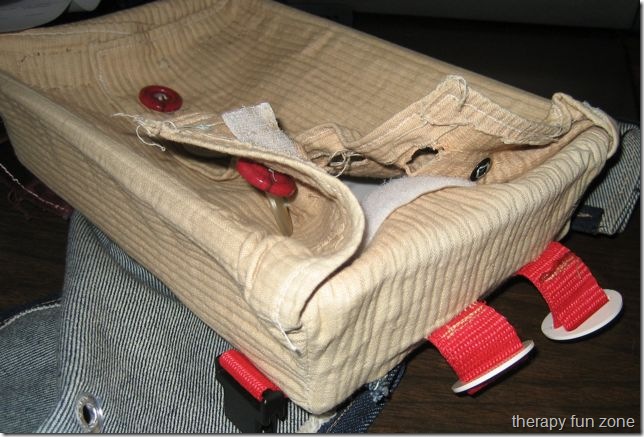 “I designed and sewed up the prototype (in the picture above) for this after trying to work with a 5th grade boy who had Downs Syndrome. He had a hard time with his pants buttons and zipper, and would come out of the bathroom with them undone to get help. At the same time, he rejected practicing on a doll or stuffed snake as “baby stuff,” and was NOT interested in practicing on clothing – “boring!!!”  He did like to use the wiggle pen and a few other fine motor toys, so after about 10 hours struggling with a sewing maching (not my forte), I made up one of these. I put the favored toy inside, closed up all the fasteners, and gave it to him. It worked! He willingly worked at opening them all, accepted my help to learn how, played with the toy he found inside, and then closed them all back up at the end of the session, “for next time.”

I then started using this with children with severe language weaknesses, such as children with autism and/or moderate cognitive disabilities. Instead of trying to get across that if they practiced buttoning and unbuttoning x number of times, then I would give them a reward, using the Fasten-ator was a much more natural cause-and-effect activity. They saw the desired item or icon go into the box, saw the buttons and/or zipper and/or snaps and/or clips and/or laces get done up (modeling!), and understood that to get the toy those fasteners needed to get un-done!

Some of the other OT’s I worked with asked if they could get one too. I wasn’t eager to spend another 10 hours sewing again, so — long story short — Abilitations was interested and started having them manufactured to sell.”